Here are the results of a new clinical study conducted at Arizona State University evaluating Product B and its  impact on aging in the body. 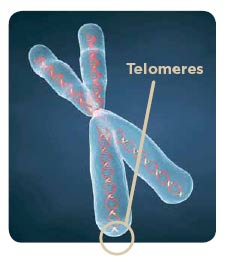 First here is some basic information on telomeres- they are a marker of aging.

The length of telomeres, or the caps on the ends of chromosomes that protect DNA in cells, is the key to healthy aging. In the simplest terms, “when telomeres get short, bad things happen.” To live a long and healthy life, scientists have offered guidelines for telomere health that include controlling stress, getting optimal nutrition, obtaining quality sleep, minimizing toxin exposure, and finally, bolstering antioxidant defenses against free radicals and reactive oxygen species.

“As we age, our cells are constantly dividing and our telomeres shorten during the process,” explains molecular biologist and telomere researcher Bill Andrews, Ph.D. “Oxidative stress, toxins, and a poor diet can cause the process of telomere shortening to speed up, which means we age faster in life. And the faster we age, the sooner we face age-related health conditions down the road.”

That’s where Product B™ comes into the picture. As part of its Healthy Aging Solution, Isagenix features Product B as a proprietary formula of potent bioactives, botanicals, and vitamins with antioxidants to support the health of telomeres. Extensive and detailed research accompanied the creation of Product B  followed by an Isagenix commitment to continued research and development of the product through collaboration with industry experts and leading experts.

Now Isagenix has announced results of a new clinical study at Arizona State University evaluating Product B impact on aging in the body involving a key biomarker that is associated with antioxidant defenses in cells. The findings were presented at the company’s 2014 “Strength in Momentum” Celebration in San Diego on August 24, 2014.

“There have been large advances in telomere science, including direct measurements related to detecting cells with the shortest telomeres or average telomere length using sophisticated techniques,” said Isagenix Chief Science Officer Suk Cho, Ph.D. However, he added that to date, “There is yet to be a direct measure of telomeres that is reliable enough for an accurate measurement of telomere length for obtaining statistical significance in a clinical trial.”

But there’s good news. As Dr. Cho explained, “Leading telomere researchers agree that direct telomere testing is not where we’d like it. However, there is an indirect measurement that is supported in the scientific literature that is linked to telomere health.”

Recently, Isagenix funded an independent, randomized, placebo-controlled, double-blind clinical trial–the “gold standard” in research–to evaluate the effects of Product B on the antioxidant defense systems that are essential for maintaining healthy telomeres and warding off signs of premature cellular aging. The study, conducted by researchers in the School of Nutrition and Health Promotion at Arizona State University, involved 43 young healthy men and women. The researchers divided the subjects into two groups supplemented with either four capsules per day of a placebo or Product B.

At the end of the study, the subjects using Product B showed a significant elevation of catalase in subjects’ red blood cells. Compared to those who took the placebo, the subjects on Product B had increased their catalase activity by more than 30 percent. The findings suggest profound benefits attributed to Product B supplementation.

The relevance of this finding was not lost on the researchers, who commented, “The increase in catalase observed by Product B is an exciting development considering the relationship between the enzyme and increased lifespan in animal studies.”